Home > Latest News > Watching Coronation Street cover my children’s disease is upsetting, but people need to know about it
< Back to Latest News
Latest News

Watching Coronation Street cover my children’s disease is upsetting, but people need to know about it

Picking up the phone, I dialled the number of a woman I’d found on the internet. I was desperate for some sort of support or comfort after being told my daughter, Rachael, had a serious and devastating illness.

Instead, I was told: ‘I’ve had four children with the same disease and they’ve all died. Get Rachael a big telly because she won’t be able to get out of bed soon.’ Her words were so awful and grim. Nearly 10 years on I am seeing Rachael’s illness being explored onscreen in Coronation Street. Tonight, Steve and Leanne will discover their young son Oliver has the same genetic disorder as my daughter: mitochondrial disease. An often life-limiting illness that can rob sufferers of all their abilities.

This is the voice of Joanna Wells, the mum of Rachael who suffers from the same mitochondrial condition that Charlie Gard had. In this open and honest piece Joanna gives her account of what life is like for those who suffer from mitochondrial disease as Coronation Street embark on a new storyline including a mitochondrial diagnosis.

You can read the full article via the Metro here. 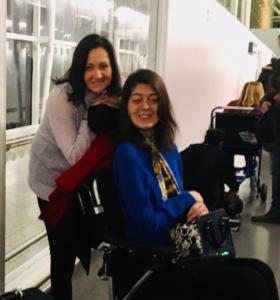